Commemorations and Perceptions of the Auxiliary Division 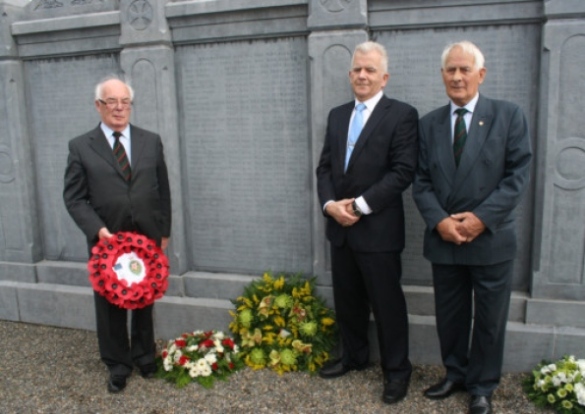 The Auxiliary Division are perceived as almost being inseparable from their sister force, the Black and Tans, at least as far as the average commentator is concerned. Even some of the men and women who fought against them tend to regard the two forces with the catchall sobriquet ‘Tans.’ This common confusion has come to be one of the defining features of the Division. The other defining feature of the ‘Auxies’ was that they were remembered as being extremely competent soldiers. Eamonn Broy recalled that they were regarded as ‘…almost bullet proof, and the I.R.A. would never dare to attack or even face such redoubtable adversaries.’[1] Their behaviour under fire marked them as being possessed of a superhuman courage.[2] Peter Cottrell in his history of the conflict has remarked that

‘… [Tom] Barry set out to kill all of the policemen in the patrol to send a message to both his own men and to the Auxiliaries…He also needed to break the psychological hold that the Auxiliaries had over many rebels by showing that they could be defeated.’[3]

But the Auxiliaries were not held in great esteem by the majority of Irish men and women. For some their behaviour both on and off duty marked them as ‘sub’ rather than ‘superhuman.’ The actions which the Auxiliary Temporary Cadets of K Company were subjecting the citizens of Cork to were beggaring belief. Florrie O’Donoghue, Intelligence Officer with the Cork No. 1 Brigade IRA, described the behaviour of the Cadets as

‘…holding up and searching civilians in the streets, robbery and insulting behaviour. In November and December their drunken aggressiveness became so pronounced that no person was safe from their molestations. Age or sex was no protection. Poor women were robbed of their few shillings in the streets in broad daylight. After their raids on houses articles of value were frequently missing. Whips were taken from whops with which to flog unoffending pedestrians. Drink was demanded at the point of a revolver.’[4]

After the Dillon’s Cross Ambush in Cork City, in which the Auxiliaries had suffered serious casualties (including one who later died of his wounds), the Cadets engaged in what can only be deemed to be behaviour of a questionable value. Mary O’Sullivan, niece of the owner of O’Sullivan’s public house, recalled that in the confusion immediately after the ambush she saw

‘… a number of young men being rounded up and forced to lie on the ground at the entrance to St Mary’s Avenue. One of them was then dragged to the centre of the crossroads, stripped naked, whipped repeatedly and forced to sing ‘God Save the King’ until he collapsed on the road.’[5]

In spite of their negative reactions among the Irish populace, the Auxiliaries still do have their champions. Historians like David Leeson and Ernest McCall have both written monographs concerning the Cadets, which attempt to act as reformist pieces for the Division. McCall titles his work, Tudor’s Toughs, reviving an arcane nickname for the Division.

How the Auxiliaries are remembered varies from person to person. A lot depends on what tradition a commentator was raised in. In Southern Ireland the Cadets are popularly remembered as savage brutes, constantly drunk (on either liquor or power) and spoiling for a fight. Neil Jordan’s Michael Collins show the Auxiliaries as hardy soldiers, breaking down doors and willing to take on ‘all comers’, IRA or civilians; emotive scenes from Croke Park or the Custom’s House raid pay tribute (if not complete representation) to the behaviour of Auxiliaries in those situations. Ken Loach’s The Wind That Shakes the Barley, also portrays the part which the Auxiliaries played in the war in West Cork. The film depicts the Auxiliaries as being easily enraged and willing and able to commit a brutal murder in order to preserve their position of superiority over the locals. A scene which bears a striking resemblance to the Kilmichael Ambush pays tribute to the martial skills of the former officers, showing that whilst they had been ambushed, they were nonetheless able to react quickly and effectively to the IRA. The genre presents the Auxiliaries as a capable military force, driven and successful after a fashion in their engagement of the IRA. However the directors never show any humanity in their subjects and so the Auxiliaries always remain uncomplicated, frenzied killers.

With the advent of the year 2013, Ireland has begun what has been loosely termed the ‘long decade’ of commemorations. The period marks the centenary of many of the events which gave rise to not only the beginnings of the Irish state but also to the Northern Irish state. In a few short years the country will also be faced with the challenge of how best to mark the passage of tumultuous events like the Kilmichael Ambush, in which an Auxiliary Patrol was destroyed and seventeen Cadets killed. Such a loss shook the British forces in Ireland to the core and should not be underestimated in its effectiveness. The actions of the IRA commander Tom Barry even now evoke controversy among historians, with some claiming that he murdered men who had surrendered, whilst others claim that the revisionists are incorrect and that Barry acted correctly.

Local history groups in West Cork maintain the area in which the ambush took place and tend to the existing monument there, which has unfortunately suffered from the ravages of time. Recently a controversy arose when a joint effort by two local groups sought to draw upon public funds to improve the area and enhance the experience for visitors to the memorial. The controversy came from the fact that they wished to recreate a model of one of the vehicles in which the Auxiliaries were travelling and also to list the names of the Cadets killed on a plaque beside the republican dead.[6] When asked for a comment on the matter, a local man expressed the belief that

‘…the inclusion of a Crossley Tender would take from the atmosphere of the ambush site and ‘would basically turn it into a theme park along the lines of a Disney World attraction.’ He said there had been little public consultation apart from the local newsletter for something that is a national issue.’[7]

Furthermore he believed that to add a plaque commemorating those Auxiliaries killed at Kilmichael would ‘… be an affront not just to the people who were at Kilmichael on the day but the people of West Cork.[8] Clearly it appears to be easier to perceive the Auxiliaries as a nameless, faceless entity devoid of individuality and thus making them easier to identify against. Eventually the idea of the Crossley model and the commemorative plaques were vetoed in their entirety by the proposing bodies, instead opting for a simpler presentation. The Secretary of the group remarked that ‘there will be plaques there showing what happened but we’re not naming the volunteers either on it. Neither side will be named.’[9]

An editorial a week later in the Southern Star newspaper goes even further in its condemnation of the idea, even though the writer is somewhat confused as to who actually died at Kilmichael: the Auxiliaries or the Black and Tans. It writes,

‘would the British erect a memorial to the German aviators who indiscriminately slaughtered men, women and children in bombing raids on Britain during the Second World War? Of course not!  Our neighbours are not that mad or sufficiently brainwashed to debase or dishonour their history. Sadly, on this side of the pond things are different.’[10]

And it appears that the editor is not alone in his disquiet regarding the matter. Peter Berresford Ellis, a reader based in London, writes that he finds the whole matter rather bizarre,

‘Now, I know this is the age of ‘peace and reconciliation’ but surely there is a limit to how far it can go? Or will the day come when we see memorials being erected in Poland, France, Belgium, Greece and Italy to those members of the Waffen [military as opposed to police] SS units who occupied and fought there? Maybe a full-scale replica of a Stuka [Luftwaffe dive-bomber] erected in Warsaw’s Old Town Market Place (Rynek Starego Miasta) as a memorial? It’s a curious world, but surely not that curious.’[11]

In 2012, a relatively small gathering in Glasnevin cemetery, Dublin, was denigrated by a flurry of letters to national newspapers condemning the organisers attempts to commemorate the service and deaths of members of the RIC and Dublin Metropolitan Police force. It is an unfortunate necessity in modern Irish life to differentiate between the Old RIC, the force that upheld ordinary law and the New RIC, or the mercenary forces attracted to Ireland with high wages and a possibility of adventure. This latter cadre formed the hated Black and Tans and the Auxiliaries. Organisers of commemorations throughout Ireland need to learn from the mistakes of the past, such as in the 1960’s when vast celebrations took place for the fiftieth anniversary of the same events. A holistic approach must be taken when looking at histories not often covered in textbooks or in rebel ballads. Not all of the Auxiliaries were bad men, nor were all of the IRA to be placed on pedestals. Some republicans engaged in what we would today generously label ‘questionable’ practices during a time of war.

Pádraig Óg Ó Ruairc correctly identifies a key issue when he writes that,

Indeed in recent years the British government has undertaken a redress scheme towards the Kikuyu victims of British government state sponsored torture and barbarity, all perpetrated in the name of keeping Kenya within the Empire. Which all sounds very similar to the actions of some members of the Auxiliary Division in West Cork, Dublin and elsewhere. One feels that the powers that be must strike the right balance between remembrance and commemoration, between acknowledging that a body of men were present in Ireland, including the fact that some of them died here, and celebrating their deeds and work.

[11] Perplexed by the Prospect of a Crossley Tender Memorial at Kilmichael, Peter Berresford Ellis, http://www.southernstar.ie/News/Letters/Perplexed-by-prospect-of-a-Crossley-Tender-memorial-at-Kilmichael-15082013.htm, accessed on 20.08.2013.

Dr. Eamonn T. Gardiner, is a Consulting Historian. He has previously conducted research into links between wartime traumatic-neurosis and evidence of Post Traumatic Stress Disorder (PTSD) amongst veterans of the First World War serving as Auxiliary Policemen, during the Anglo-Irish War 1919-1921. He has written extensively on British central and colonial administrative responses to popular insurgencies. In 2009 he published 'Counterinsurgency and Conflict: Dublin Castle and the Anglo-Irish War (CSP, 2009).' Published papers include; 'The training of the Irish Volunteers, 1913-1916' (The Irish Sword, 2017); 'Scattered, Ambushed and Laid Out: War and Counterinsurgency in the greater Tuam area, 1919-1921' (JOTS, 2015). Research interests include De-Colonialisation/Post-Colonialism; Insurgency, Police/Military Histories; Institutional Histories; Modern Irish/World History; History of Conflict, Protectorates and Peace-Keeping; Hegemony; Old and New Terrorism.
View all posts by eamonntgardiner →
This entry was posted in Uncategorized and tagged auxiliaries, auxiliary division, Commemoration, Cork, Dillons Cross, Kikuyu, Kilmichael, Mau Mau, Michael Collins, ric, The Wind That Shakes the Barley. Bookmark the permalink.