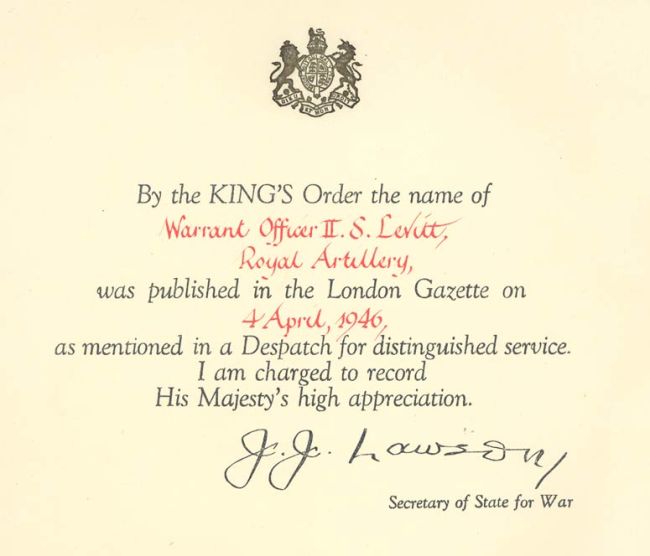 In times past, well in reality in past conflicts, a soldier whose actions merited serious some recognition by his home countrymen and women could be Mentioned in Despatches. This tradition arose from Commanding Officers of various units reporting their actions back to their head-quarter elements; due to the clipped nature of military communications, it was extremely rare (and thus extremely noteworthy) that an individual might be mentioned by name.

Such instances of being Mentioned-in-Despatches as they became known were recorded in the London Gazette and were a source of solace for families and communities who had a loved one serving in a conflict. A physical recognition of MiD was issued in the form of a small addition (in the UK, it was a bronze oak leaf) where a medal was also won. A formal citation was also issued on paper.

But in the modern era, with society’s drive toward the ‘paperless office’ and electronic mail, blogs (I appreciate the irony inherent by making my own argument via the blogsphere!) and social media, are we running the risk of devaluing or perhaps even losing the respect due to a soldier awarded a Mention in Despatches?

In the future will a mention on Sky News, or to briefly trend on Twitter or to be rapidly sent (and rapidly ignored) to the multitude on their smartphones? With the move toward Cyber War and 5th Generation Warfare, does the society that sponsor’s war risk destroying the personal integrity of our soldiers and importance attached to acts of heroism and bravery? In many ways this shift could be far more dehumanising than the rise and rise of drone warfare.

Dr. Eamonn T. Gardiner, is a Consulting Historian. He has previously conducted research into links between wartime traumatic-neurosis and evidence of Post Traumatic Stress Disorder (PTSD) amongst veterans of the First World War serving as Auxiliary Policemen, during the Anglo-Irish War 1919-1921. He has written extensively on British central and colonial administrative responses to popular insurgencies. In 2009 he published 'Counterinsurgency and Conflict: Dublin Castle and the Anglo-Irish War (CSP, 2009).' Published papers include; 'The training of the Irish Volunteers, 1913-1916' (The Irish Sword, 2017); 'Scattered, Ambushed and Laid Out: War and Counterinsurgency in the greater Tuam area, 1919-1921' (JOTS, 2015). Research interests include De-Colonialisation/Post-Colonialism; Insurgency, Police/Military Histories; Institutional Histories; Modern Irish/World History; History of Conflict, Protectorates and Peace-Keeping; Hegemony; Old and New Terrorism.
View all posts by eamonntgardiner →
This entry was posted in Uncategorized and tagged bronze oak leaf, citation, conflict, cyber, dehumanising, drone, facebook, integrity, mentioned in despatches, MiD, sky news, smartphone, twitter, war. Bookmark the permalink.