Phil Collins discussing his fascination with the Alamo and his decision to donate his extensive colelction of material to the public. theobservor.com blog

Collection of military memorabilia is at an all time. With the natural rise in interest in the First World War with the centenary of that conflict rapidly approaching. In this case it’s Phil Collins and his interest/obsession with the Battle of the Alamo, the thirteen day-siege of the Alamo Mission by the forces of Mexican President Antonio Lopez de Santa Anna, which culminated in a final devastating attack on March 6th, 1836. This doomed heroism provoked the ire of Texans, who rose up in defiance of Santa Anna’s regime and flocked to the army of General Sam Houston. Collins has confessed to having a massive obsession with the era and the climactic events of the Alamo, even going as far as to write the 2008 book The Alamo and Beyond: A Collectors Journey which details his engrossment; he even bought a neighbouring building and excavated down 44 inches to ‘battle depth’ in order to uncover further artefacts! He claims his interest was piqued during a visit to an antique shop during a tour, where he saw an extant letter and was later given a receipt for a saddle which one of the Alamo courier riders had received. This present from his third wife helped to fan the flames on what would become a lifelong love affair with the battle.

Interests are healthy things. For instance I have an interest in military matters, as expressed through the medium of this blog; a weekly diary entry of my thoughts on the interactions of the history of Warfare with our modern world, if you will. For others, especially the “amateur” historians, or the collector in the street, with their own interests and their own specific collections, history can become quite focused. The narrow focus on a battle or a conflict or a unit/collection of unit flashes, can lead to too narrow a focus sometimes. Which can in turn lead to the exclusion of the macro in favour of the narrower micro. While collectors often value a select few ‘prize’ items with a direct connection to their favourite event/period over others, they should exercise caution so that this is not to the detriment of their view of the larger period. An item of ephemera or a uniform/weapon is only truly valuable when it is viewed as being part of the greater historical tapestry.

At the same time private collections can secure treasure troves for the state or locality which is often (rightly or wrongly) hard pressed to purchase items which might come up at auction. The Jackie Clarke collection, which is housed the old Provincial Bank building in Ballina, Mayo, Rep. of Ireland, is a great example. Jackie Clarke, a local man, amassed an amazing collection of items which range over four-hundred years of British and Irish history; items in the collection include an edition of the Oxford Gazette dated from 1665, reputed to be the first newspaper, copies of the 1916 and 1917 Proclamation of the Irish Republic and letters from Irish military hero Michael Collins, Irish President Douglas Hyde, land reformer and folk hero Michael Davitt and the infamous Fenian leader O’Donovan Rossa, to name but a few.

Sinead McCoole, archivist of the Jackie Clarke Collection in Ballina, Mayo. Most of the items were uncatalogued and were wrapped in old newspapers, or plain brown paper packages with string. nytimes.com

While collections as deep and as rich as these are rare, when donated to the public, they offer an unrivalled view into the past for all who care to gaze upon them. But they are not without their detractors in some quarters who feel that they are an extravagance and a ‘poisoned chalice’ on the grounds that the government under which they are operating will never make a ha’penny [sic halfpenny] out of exhibiting and curating our cultural heritage. This mindset is thankfully not replicated too widely, but there are still those out there in and out of positions of power who feel that cherishing our shared cultural heritage is not a job for the state. 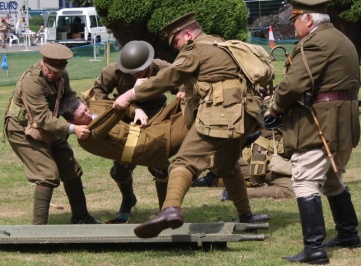 The tireless work and investment by archivists, passionate reenactors, collectors, even hoarders if you will, allows historians a rich tranche of material with which to work from to help modern society construct a more cohesive narrative of our shared cultural heritage. The archivist is the quartermaster to the historian in the cut and thrust in the establishment of the narrative. The actions of Collins, Clarke, et al to not only collect at their own expense, but to actively and consciously fight to return their private treasures to the public sphere, speaks volumes regarding the esteem in which these collectors hold their items. If you will think for a second of the single most valuable item you own, treasure more than anything else, something you’ve spent a lifetime collecting and caring for; now give it away to the whole world, for free and let them all gaze upon something you have kept to yourself for so long. Those are the actions of a true scholar.

To end as I started, I’ll reference the great Mr. Collins, whilst adding that even though he wasn’t talking explicitly about historians, the lyrics to That’s Just the Way It Is can still resonate in this context… ‘Cos all day long he was fighting for you/And he didn’t even know your name/Young men come and young men go/But life goes on just the same.’